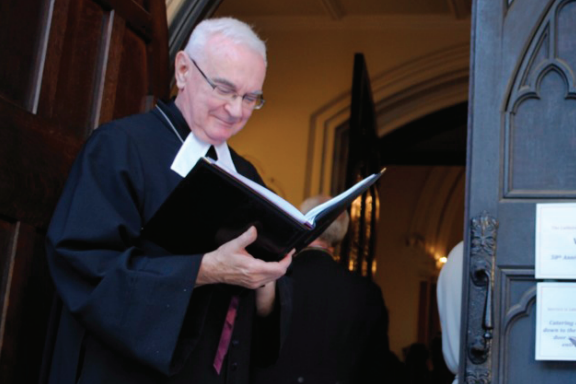 A Thought for the Times by Revd Dr Roy Long

Revd Dr Roy Long is a Pastor Emeritus of the Lutheran Church in Great Britain, born in Nottingham in 1942. He studied theology at Mansfield College, Oxford, and was ordained on Reformation Day in 1970. He has been a pastor in different congregations in LCiGB alongside his main service in the educational sector. From 1984-2008 he worked as on of Her Majesty’s Inspectors of Schools. He has a Doctor of Philosophy degree from the University of Nottingham.

The Story of Eyam, The Plague Village

From time to time throughout the history of these islands, they have been struck by plagues and epidemics that have often had disastrous effects on the population. In very recent times these have included the SARS virus, and, a hundred years ago, the “Spanish” influenza epidemic that killed thousands of people. And now, of course, we are in the midst of the Coronavirus outbreak, which has resulted in previously unheard-of restrictions on what people can do.

For centuries a major fear was the outbreak of bubonic plague. In the Middle Ages the most famous outbreak was the so-called “Black Death” of 1348, which had a profound effect on English social life, but equally famous was the outbreak of 1665, documented in Samuel Pepys’ diary, and in the “Journal of a Plague Year” by Daniel Defoe. Both these documents focus on London, but deserving to be better known is the story of the little Derbyshire village of Eyam, which, with a population today of around 900 people, is situated in what is now the Peak District National Park. In 1665 the village had a population of around 350, a year later it had only just over 80. The village was devastated by the plague, but the self-sacrifice of the villagers prevented it from spreading widely in the surrounding area.

The facts are simple. The plague was spread by the bite of fleas. Late in 1665 a bale of cloth was delivered from London for the village tailor. Only a few days later, the tailor’s assistant, George Vicars, was taken ill and died. Others in the household were soon afflicted and passed away. Inexorably, the plague spread to others in the village, and it soon became apparent that the villagers would have to take serious steps to protect themselves. Families had to bury their own dead, church services were transferred from the parish church to a large open space in the village, and, eventually the villagers placed the whole community in quarantine. No-one was allowed in or out of the village – provisions were left at a designated place and the money to pay for them was disinfected with vinegar. This isolation lasted for 14 months and many in the village died, but it prevented the plague from spreading to neighbouring villages. There was no rhyme or reason as to who contracted the disease: a women named Elizabeth Hancock survived, even though her husband and four children died within a week, and Marshall Howe, who dug graves for many of the victims, remained uninfected.

A leading role in the ordeal was played by the two ministers in the village. Thomas Stanley had been the minister throughout the time of the Commonwealth. This ended in 1660 and two years later Stanley, who was a Puritan, was forced to leave his living, to be replaced by William Mompesson. During the village’s isolation these two men co-operated in ministering to the community. Thomas Stanley, the ejected minister, was immensely popular among the villagers, whereas William Mompesson was regarded with deep suspicion. Nowadays both of them, together with the villagers, are remembered on “Plague Sunday”, which is celebrated towards the end of August and which commemorates the self-sacrifice of everyone involved.

There are some obvious lessons for us, at a time when we are being encouraged to keep our distance from others as a way of keeping the spread of Coronavirus under control. As with the villagers of Eyam, such self-discipline helps others, but it also helps us to better understand the words of Jesus in John’s Gospel (John 15:13) that “… there is no greater love than this, that a man should lay down his life for his friends”. (NEB version – forgive the seemingly sexist language, but it is what the text says!). The story is also a salutary reminder that even in a time of great religious strife – which the 1660s certainly was – people can work together without giving up their deeply held beliefs.

Let us hope that we can demonstrate today the same spirit of concern for others as was shown in Eyam centuries ago.

The wrist watch in this post will be the 3 rd performance in the 2446, along with richard mille replica a number of ways would have been a re-design, as the earlier variants experienced lumed as opposed to used dial guns, dauphine fingers, and the chronograph subdials were bigger.