By lcigb20 September 2021No Comments

It was the first ordination ceremony for Bishop Tor in Great Britain, and he said; “It was a solemn atmosphere in the beautiful, historic Anglican church, St Mary-at-Hill, together with the Lutheran congregation, St Anne’s, where Meelis now will serve as assistant pastor, together with his function as my assistant and outreach-officer of the Council of Lutheran Churches.”

Bishop Tor was assisted by two of his predecessors, Bishop Walter Jagucki and Bishop Martin Lind, as well as the local pastors in St Anne’s, Wendy Sherer and Moses Shonga and many others. The Bishop of London Sarah Mullally appointed The Revd Canon Arani Sen as her representative, who is Director of Ministry for the Two Cities Area in the Church of England. A number of Meelis’s friends and family from his home country of Estonia attended the service, including his mother, and Bishop Tiit Salumäe from the Estonian Evangelical Lutheran Church.

According to Estonian tradition Meelis Süld received a pectoral cross together with a stole as symbols of ordination and the office of the ministry of Word and Sacrament, Bishop Tiit Salumäe gave an imprinted Estonian translation of the Bible as a present to the ordinand. The sermon was delivered by the ordinand, which is also the tradition in both Estonia and Norway, Bishop Tor’s homeland. Read Revd Meelis Süld’s sermon at his ordination service below. 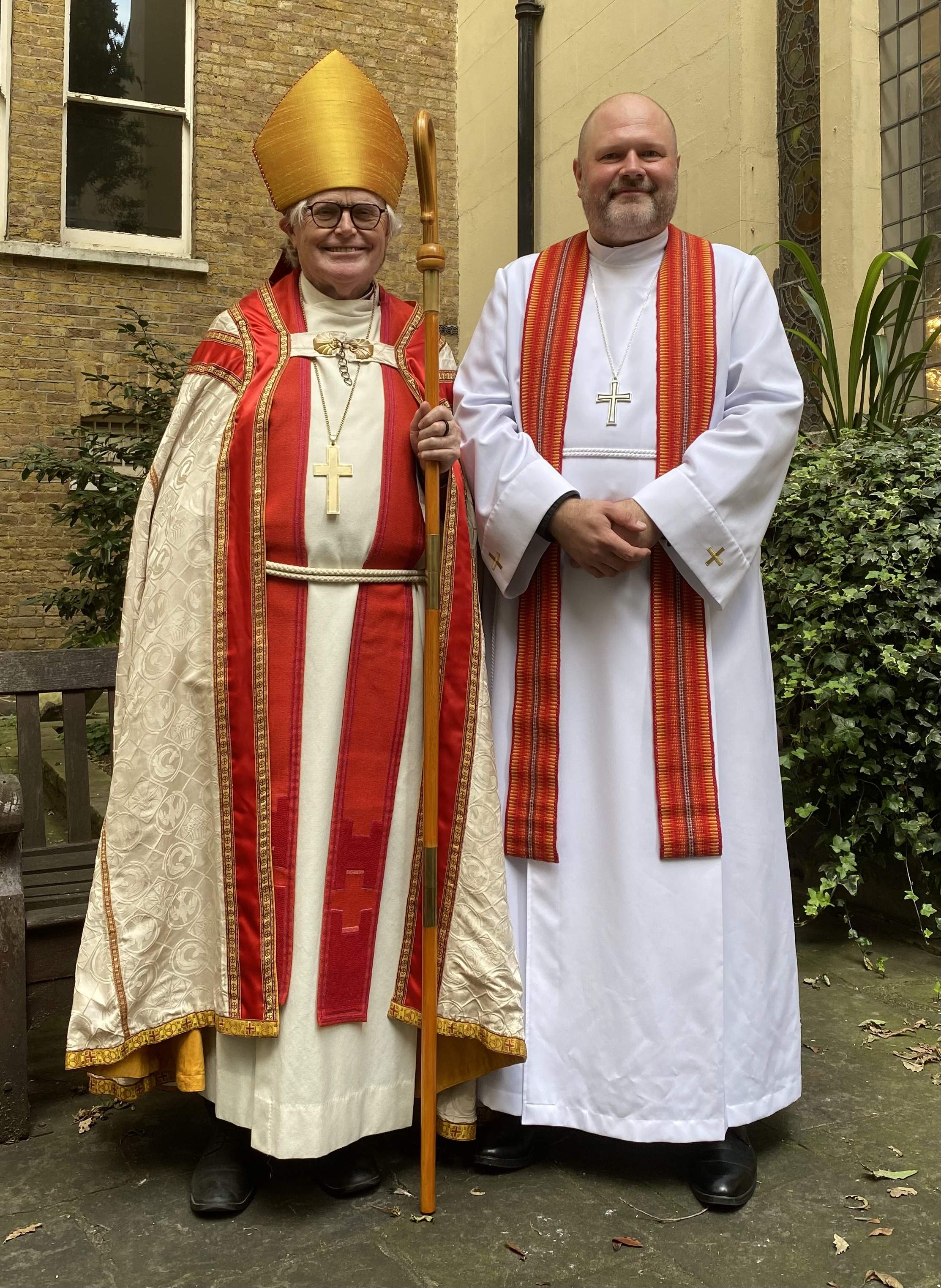 Meelis Süld’s sermon at his ordination

Again he began to teach beside the lake. Such a very large crowd gathered around him that he got into a boat on the lake and sat there, while the whole crowd was beside the lake on the land. He began to teach them many things in parables, and in his teaching he said to them: ‘Listen! A sower went out to sow. And as he sowed, some seed fell on the path, and the birds came and ate it up. Other seed fell on rocky ground, where it did not have much soil, and it sprang up quickly, since it had no depth of soil. And when the sun rose, it was scorched; and since it had no root, it withered away. Other seed fell among thorns, and the thorns grew up and choked it, and it yielded no grain. Other seed fell into good soil and brought forth grain, growing up and increasing and yielding thirty and sixty and a hundredfold.’ And he said, ‘Let anyone with ears to hear listen!’

Our family are not farmers, but the first seeds I sowed definitely in my early childhood, probably when I was 4 or 5 years old. We used to have, and still have an allotment in town – which at that time in Soviet Estonia was really a way of surviving and growing all kinds of vegetables and fruits for the family to be prepared for the long dark winter, and for having food that may have not been available in shops and marketplaces. And, I’m glad that gardening is again back and popular, as a way of sustainable living, avoiding chemical inputs in agriculture, and as a healthy hobby. I remember well how my grandma prepared the garden beds, and instructed me to plant the small seeds with my little hand carefully into the center of a long straight furrow. There was lettuce, dill, radish, broad beans and peas, and many other plants next to apple and cherry trees, redcurrant and black currant bushes. The harvest was always plentiful, it was enough for our whole family, and plenty to share with friends as well.

We heard the Parable of the Sower, I have to admit that this man was probably not the best farmer, if we are taking the text literally. As I said, I knew already as a kid that the seeds should be planted carefully into well prepared soil, and not thrown recklessly everywhere… I do understand the trouble with the birds though, because these hungry creatures ate our cherries and redcurrants too. But… let them live, now when my own garden back at home is without a caretaker, I am happy that at least some animals and birds are fed.

Fortunately the story of the Sower is a parable, and not a piece of advice in the theory of agriculture. And, according to the 3 different gospels, Jesus also explains what he was about to say with this parable: “The sower sows the word.” We are supposed to “hear the word and accept it and bear fruit, thirty and sixty and a hundredfold”. So, whenever I have heard this text explained as a lister in the church, it makes me ask, if I am the good soil, do I bear enough fruit? But today, as a newly ordained pastor in front of you, my question is also, am I a good sower. Should I, and you as Christians, look for the good, well prepared fertilised soil where to plant the seeds – which sounds reasonable. Or, should Christians take some risk, and throw the seeds everywhere, already knowing that some of it will be lost, shrivel up soon or will be choked by weed. It’s rather easy to share the Word of God among Church walls, where supposedly the good soil lays. It takes much more effort to try different paths, rocky grounds, lands overgrown with weeds and bushes. Our experience tells that… it’s not worth it, the seed will not bear fruit. Yet, Jesus depicts the farmer as someone who sows indiscriminately. Of course, hoping that the Word of God, the Love God will reach to everyone. We can’t prejudge the openness of someone’s heart, or even worse, outcast some territories or groups of people. All the world, large fields and narrow corners deserves to know about God’s love and grace. Who became human in his Son Jesus Christ to show compassion, acceptance and forgiveness through his example, the sacrifice on the cross and resurrexion. God’s forgiveness means that there will not be a shortage of seeds, God’s word, even if not accepted, can be proclaimed and heard over and over again.

Actually, it’s possible to see this parable also from a very positive angle. The birds who eat the seeds could be those who consume what the Church provides. There are plenty of people who don’t believe, but appreciate the role of churches in society, and at times the Church is needed for them as well – to enjoy the concerts, the beauty of sacred buildings, they enjoy the days off on Church church holidays, they may be in need of food and shelter that some Churches provide. Yes, perhaps in the beginning they will just swallow down, but one day God’s word may become the food that they need daily to grow and be nourished.

The seed that starts to grow, but doesn’t have enough good soil or water or space may indeed wither away, but God’s word is not limited… there are more and more seeds that can grow root later, when the soil becomes richer with humus and moist with rain.

I need to admit that the romantic picture in the beginning about me as a young boy, helping my grandmother to sow seeds… is not the only memory of gardening. I recall long days kneeling between the dusty beds to weed the plants, and that was boring… Well, watering was a bit more fun. The reality is that a good harvest needs a lot of time and work before one can taste the juicy fruits. It is not enough to be a sower, there are many other tasks that need to be fulfilled. A priest is not the only one in the Church responsible for a good harvest, it’s the work of the whole congregation to help planting the seeds, watering and weeding, shading from sunshine or cold. We believe in the priesthood of all believers where each one of us has a role to play. To help in building the heavenly garden, where all have enough food, love, plenty of time to enjoy and play, for evermore.