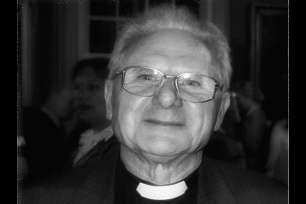 Wednesday, August 4, the Lord called home his faithful servant Róbert Pátkai, he was laid to rest at woodland cemetery near Lilbourne in Northampton next to his dear wife Elizabeth on August 16, at the age of 90. The Very Revd Pátkai served many roles with the Lutherans in Great Britain over the years and will be missed by all. Bishop Tor B. Jørgensen sent a letter of condolence to the family of Dean Róbert Pátkai.

Lutheran pastor Róbert Pátkai had to leave Hungary at the age of 26 because of his involvement in the 1956 Revolution. He settled down in England, where he organized the Hungarian-speaking Lutheran Church of England. He pastored this community for forty years beside his regular ministry in an English-speaking congregation. Between 1964 and 1988 he served at St Anne’s Lutheran Church in Central London. From 1977 onward he also served as the Dean of the United Lutheran Synod in Great Britain (Lutheran Church in Great Britain). He was co-founder and later chairman (1997–2008) of the Working Group of Hungarian Lutheran Pastoral Counsellors Living Abroad. Between 1992 and 2011 he led the National Federation of Hungarians in England as its President and was active as the editor of the journal Angliai Magyar Tükör (Hungarian Mirror). In 1993 he also joined the Order of Saint Ladislaus.

The work and ministry of Róbert Pátkai was acknowledged with several awards and prizes. In 1998, he received the Cross of St. Augustine from the Archbishop of Canterbury. In 2010, the Evangelical Lutheran Church in Hungary awarded him with the Ordass Prize, the highest merit given to pastors in Hungary. Based on his achievements in the field of church ministry, journalism and culture he received the Hungarian Order of Merit Commander’s Cross (1991), the Ráth Mátyás Award (2006) and the Hungarian Minority Award (2008).

In 2005 Róbert Pátkai featured in a biographical documentary edited by Tamás Fabiny and broadcast on the Hungarian Duna Television Channel. In 2020, the Luther Publishing House of the ELCH published a compilation of sermons and articles (edited by Péter Bakay) to honour Róbert Pátkai’s 90th birthday.