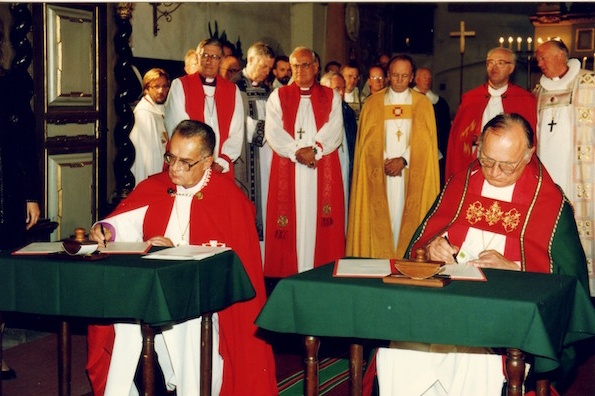 Lutherans and Anglicans shared their vision for communion

The LCiGB together with other representatives of the Churches of the Porvoo Communion participated in an on-line theological conference and in the Porvoo Contact Group on-line meeting on October 7-8.

The Porvoo Communion is a communion of Churches that have signed an agreement to “share a common life in mission and service”. These churches are either Anglican or Lutheran, the LCiGB joined the communion in September 2014 together with the Latvian Evangelical Lutheran Church Abroad, being the youngest members.

The theological conference, with the title ‘A Vision for Communion’, looked back to the theological vision behind the signing of the Porvoo Declaration in 1996, reviewed how that vision for had been lived out subsequently in the Porvoo Communion of Churches, and considered current challenges and resources for addressing them.

Bishop Tor B Jørgensen described in the Porvoo Contact Group meeting the situation in the LCiGB’s congregations in a time of pandemic, “It is different, strange, difficult not to be able to come together to regular services. On the other hand there are also reports confirming that the communication has improved. More people can attend on-line services and other kinds of meetings, in addition to more direct and private contact through phone or chat on an individual level.”

In his report, Bishop Tor B also raised the question about virtual communion, “One item of special concern has been how to celebrate communion in this time of crisis, not being able to congregate. Since there is a strong tradition for local liturgical freedom and with my respect for the local minister’s feeling of pastoral responsibility, I have accepted that some congregations have arranged “virtual” eucharist on certain conditions. We will soon have a Ministerium meeting where we will evaluate the experiences.”

In the final session, the Co-Chairs of the Porvoo Contact Group, Archbishop Michael Jackson and Bishop Matti Repo, led the participants in some reflection on what kind of proposals for the future of the Porvoo Communion might emerge from the theological thinking in which they had participated together. Themes that emerged from the discussion included:

The wrist watch in this post will be the 3 rd performance in the 2446, along with richard mille replica a number of ways would have been a re-design, as the earlier variants experienced lumed as opposed to used dial guns, dauphine fingers, and the chronograph subdials were bigger.